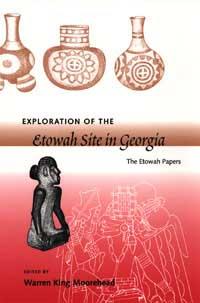 Exploration of the Etowah Site in Georgia
The Etowah Papers

"The descriptive material [in the book] is priceless. . . . Any archaeologist who works on Mississippian cultures will want it."—Vin Steponaitis, University of North Carolina

Spectacular discoveries at Mound C at the Etowah site in Georgia, the result of excavations from 1925 to 1928, changed the American perspective of the artistic achievements of prehistoric Native Americans in the eastern United States. These discoveries, in a mound that had supposedly already been excavated under the sponsorship of the Smithsonian Institution in 1883, made up the final major field expedition of Warren King Moorehead, a legendary figure in American archaeology.
The papers, written in the first person and originally published in 1932, at the end of what is considered the humanistic "golden age" of American anthropology, today offer a fresh understanding of the history of American archaeology and of the cultural heritage of prehistoric Native America.
The Etowah site was designated a National Historic Landmark in 1965.

Contents
I. Exploration of the Etowah Site in Georgia, by Warren King Moorehead
II. History and Symbolism of the Muskhogeans, by Charles C. Willoughby
III. A Study of the Ceramic Art of the Etowans, by Margaret E. Ashley
IV. Comparison between Etowan, Mexican and Mayan Designs, by Zelia Nuttall
V. Molluscan Shells from the Etowah Mounds, by Frank Collins Baker

Warren King Moorehead (1866-1939) was known during his time as the dean of American archaeology. He was a member of the field staff for Indian exhibits at the Chicago World’s Fair of 1893 and was the first curator of the Ohio Historical Society. At the time of his Etowah research he was director of the Robert S. Peabody Museum of Archaeology at Phillips Academy in Andover.

"Most of the value of his report is the account of the fieldwork and the description of the artifacts, especially the stone statues, embossed copper figures, and shell gorgets, now considered representative of the Southeastern Ceremonial Complex. Because so many of these artifacts are now widely dispersed or unfortunately lost, this volume provides essential data for students of Etowah art and iconography."- American Antiquity
--American Antiquity

"Perhaps the ultimate value of the Etowah Papers is as the primary published source for a set of excavations at one of the premier Mississippian earthwork sites in the Southeast. The volume also provides an early view of the multi-disciplinary approach, a further testament to Moorehead's legacy in American archaeology."
--Mississippi Archaeology