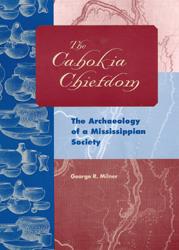 The Cahokia Chiefdom
The Archaeology of a Mississippian Society

"A well-written summary of Cahokia and more generally of the Mississippian culture. . . . Should stimulate debate and provide a context for developing better research designs for work in that region."--World Archaeological Bulletin

"Readers will welcome this wide-ranging and closely reasoned introduction to the archaeology of the earliest and largest Mississippian paramountcy . . . this essential work . . . is a tonic against earlier hasty overestimations of Cahokia’s size and complexity."--American Antiquity

First published in 1998 by Smithsonian Institution Press, The Cahokia Chiefdom surveys one of North America's great archaeological sites that includes more than one hundred earthen mounds constructed between the 11th and 14th centuries. Milner paints a vivid picture of the site and its environs while arguing that the regional system was not as powerful and all-encompassing as commonly thought, but was instead a collection of semi-autonomous districts with far fewer people than previously assumed.

This detailed study of Cahokia research history documents environmental conditions that affected prehistoric peoples, such as river channels, flooding, and plant and animal life. In addition, he summarizes evidence of the region's food, the remains of houses and other buildings, stone tools, ceramics, crafts, population figures, the distribution of power, and labor and economics, including exchange with other societies. The author attributes the region's growth to a complex interplay of cultural, demographic, and environmental factors, including the advantages of its location and rich resources, and its decline to a reorganization of social relations across the region that involved the emergence of competing centers. This reprint edition features a new preface by the author updating archaeological evidence through 2005.