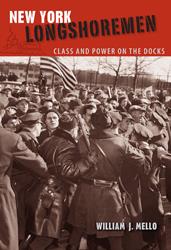 New York Longshoremen
Class and Power on the Docks

"A superb history of labor on the East Coast waterfront that may be the best account we have, not only of the industry, but of any sector of labor relations. Mello combines a thoroughly researched discussion of the behavior of elites--employers, government, and union officials--with a story of the heroic resistance of rank-and-file dockers to the best laid plans of their adversaries."--Stanley Aronowitz, CUNY Graduate Center

New York Longshoremen reveals how labor relations on the docks were driven from below by radical and reform rank-and-file movements led by communists, Catholics, and local union leaders. William Mello uncovers this little-known history that depicts the impact of state and local politics and political institutions on the labor movement in postwar America. He looks at power and collective action, as well as institutional and social movements, specifically analyzing the intersection of labor and its impact on political development.

"A fascinating account of worker militancy on the New York City waterfront. He does an excellent job describing the intensity and frequency of rank-and-file rebellions against both the ILA leadership and shipping companies."
--The Journal of American History

"A fascinating account of rank-and-file rebellion among East Coast dockworkers in the post-war era." "…delves deep into the dynamics of rebellion on the docks. Mello brings us close t othe activists who struggled to build militancy among the ranks." "…it is the stories of rank-and-file activists fighting for democracy -- in the economy, but also in their own unions -- that rarely see the light of day. Mello does us all a service by bringing these stories out into the open."
--Labour/Le Travail