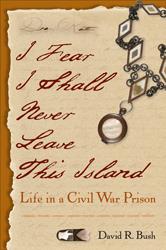 I Fear I Shall Never Leave This Island:
Life in a Civil War Prison