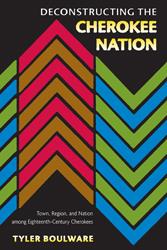 "Boulware imaginatively shows how clan, town, and regional loyalties defined Cherokee society deep into the eighteenth century. During these decades the Cherokees were hardly a singular identity, as local communities and geopolitical divisions structured society and only hesitatingly allowed for a national community to emerge."--Andrew K. Frank, Florida State University

"By exploring how village and regional affiliations shaped Cherokee life, Boulware illuminates the multilayered and dynamic nature of nationhood and Native self-definition. His nuanced analysis should lead all Native studies scholars to reconsider the persistent power of localism in Indian country."--Christina Snyder, Indiana University

This significant contribution to Cherokee studies examines the tribe’s life during the eighteenth century, up to the Removal. By revealing town loyalties and regional alliances, Tyler Boulware uncovers a persistent identification hierarchy among the colonial Cherokee.

Boulware aims to fill the gap in Cherokee historical studies by addressing two significant aspects of Cherokee identity: town and region. Though other factors mattered, these were arguably the most recognizable markers by which Cherokee peoples structured group identity and influenced their interactions with outside groups during the colonial era.

This volume focuses on the understudied importance of social and political ties that gradually connected villages and regions and slowly weakened the localism that dominated in earlier decades. It highlights the importance of borderland interactions to Cherokee political behavior and provides a nuanced investigation of the issue of Native American identity, bringing geographic relevance and distinctions to the topic.

"… exposes the convoluted reality of nation building among the Cherokees in the early nineteenth century. It will contribute much to the ongoing scholarship of Cherokee identity."
--South Carolina Historical Magazine

"…significantly augments our understanding of the multifarious elements of the Cherokee geopolitical landscape. It will inspire ongoing critical engagement with the complex processes of reconstructing Cherokee localism, regionalism, and national identity in the eighteenth and nineteenth centuries."
--The Journal of American History

"A work of lasting value, written in an accessible yet sophisticated style, and built upon a solid base of archival and published sources. Boulware’s ideas and approach are likely to benefit those who study nation and identity in a variety of historical contexts.”"
--American Historical Review

"Uses ethnohistorical methodology to make a strong case for the importance of local, particularly village and regional, identities in American Indian history during the colonial era."
--The North Carolina Historical Review

"An interesting and invigorating examination of Cherokee history during the eighteenth century. Tyler Boulware’s tour de force richly details the developing interaction of the Cherokee and British nations and of social and political events in the period….This excellent study deserves to be on the bookshelf of any serious scholar interested in Cherokee and broader American Indian history."
--The Journal of Southern History

“Provides a deeper understanding of the creation of the Cherokee identity and is an excellent example of Southeastern Indian scholarship.”
--Southern Historian