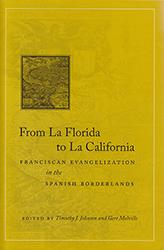 
The thirteenth-century Franciscan Roger Bacon wrote "Place is the principle of the generation of things" (Opus majus, 301). Simply put, places have agency; they make things happen. The city of St. Augustine is just such a place, and the Franciscan friars who arrived there as early as the sixteenth century shaped the city's history and surrounding region for over two centuries. In view of the 450th anniversary (2015) of St. Augustine, Flagler College hosted an International Conference (March 24-26, 2011), entitled "From La Florida to La California: The Genesis and Realization of Franciscan Evangelization in the Spanish Borderlands."

This gathering brought together anthropologists, archeologists, historians, linguists, and theologians from both sides of the Atlantic to examine the political, cultural, and spiritual impact of the Franciscans on the human geographies of Florida, Georgia, Mexico, Texas, New Mexico, Arizona, and California. The conference essays, gathered in this volume, are the first systematic study of Franciscan missionary efforts throughout the Spanish Borderlands. They reveal that the momentous encounter between the Old and New World, still evident today in St. Augustine, cannot be divorced from the story of the poor man from Assisi and those who followed him.

Timothy J. Johnson is Professor of Religion and Chair of the Humanities Department at Flagler College in St. Augustine, Florida. Gert Melville is Senior Professor of Medieval History, University of Dresden.