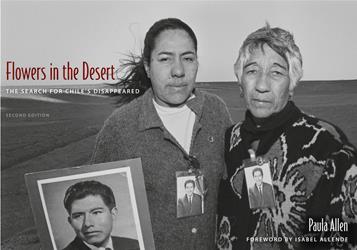 Flowers in the Desert
The Search for Chile's Disappeared, second edition

"A valuable work that revolves around a painful period of our history. I congratulate Paula Allen on her effort and endeavor to highlight the role of Chilean women and her contribution to peace, truth, and justice which are values cherished by all of us. The book is also an eloquent testimony of the courage of the Chilean women that was so important for the recovery of our democracy."--Ricardo Lagos, former president of Chile

"Teaches us about the determination of a group of women searching for their relatives in the most arid and inhospitable place on earth, as well as the brutality of the Pinochet regime."--Silvia Borzutzky, coeditor of The Bachelet Government

"A poignant and poetic take on human rights."--Bernardita Llanos, author of Passionate Subjects/Split Subjects in Twentieth-Century Literature in Chile


On September 11, 1973, with the backing of the U.S. government, General Augusto Pinochet overthrew the socialist government of Chilean president Salvador Allende. In the weeks that followed, thousands of ordinary citizens began to vanish from the cities and villages of Chile, taken from their homes, workplaces, and universities.

The "disappeared" included twenty-six men from the northern town of Calama. For seventeen years their wives, mothers, daughters, and sisters searched the Atacama desert, the driest place on each, digging with shovels under a scorching sun, until they finally found the mass grave containing the crushed remains of their loved ones.

Paula Allen documented their quest, and her mesmerizing black and white photographs capture the courageous story of the women of Calama. Flowers in the Desert puts a human face on this dark period of history that affected not only Chile but much of Latin America and the world.

Paula Allen is a documentary photographer whose work spans more than three decades. Her photographs have appeared in numerous publications, including The New York Times Magazine, Newsweek, U.S. News and World Report, Paris Match, The London Independent Magazine, Art in America, Mother Jones, Oprah, People, Marie Claire, Glamour, and others. Her work on behalf of human rights organizations has taken her to Kosovo, the Democratic Republic of Congo, Haiti, and post-Katrina New Orleans.

"A stunning record of the fallout from the Pinochet coup that effectively depicts the effects of the horrifying mass killings on the family members left behind."
--Publishersweekly.com

“An extraordinary book… it is not often a contemporary photographer achieves the level of the great American documentary photographs of WWII and the Depression; Allen has.”
--Book News Inc.

“Paula Allen has created a harrowing account of the massacres, weaving the anguish associated with political executions and disappearances into a visual and literary narrative.”
--Chileno.co.uk