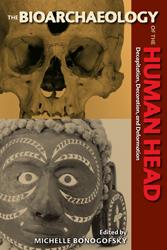 The Bioarchaeology of the Human Head
Decapitation, Decoration, and Deformation

The Bioarchaeology of the Human Head: Decapitation, Decoration, and Deformation