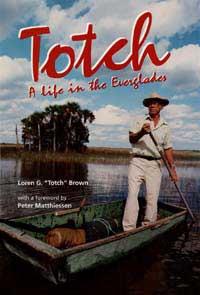 Totch
A Life in the Everglades


"Totch Brown's memoirs of vanished days in the Ten Thousand Islands and the Everglades--the last real frontier in Florida, and even today the greatest roadless wilderness in the United States--are invaluable as well as vivid and entertaining, for Totch is a natural-born story-teller, and his accounts of fishing and gator hunting as well as his life beyond the law as gator poacher and drug runner are evocative and colorful, fresh and exciting."--from the foreword by Peter Matthiessen

In the mysterious wilderness of swamps, marshes, and rivers that conceals life in the Florida Everglades, Totch Brown hung up his career as alligator hunter and commercial fisherman to become a self-confessed pot smuggler. Before the marijuana money rolled in, he survived excruciating poverty in one of the most primitive and beautiful spots on earth, Chokoloskee Island, in the mangrove keys known as the Ten Thousand Islands located at the western gateway to the Everglades National Park.

Until he wrote this memoir--recollections from his childhood in the twenties that merge with reflections on a way of life dying at the hands of progress in the nineties--Totch had never read a book in his life. Still, his writing conveys the tension he experienced from trying to live off the land and within the laws of the land.

Told with energy and authenticity, his story begins with the handful of souls who came to the area a hundred years ago to homestead on the high ground formed from oyster mounds built and left by the Calusa Indians. They lived close to nature in shacks built of tin or palmetto fans; they ate wild meat, Chokoloskee chicken (white ibis), swamp cabbage, even--when they were desperate--manatee; and they weathered all manner of natural disaster from hurricanes to swarms of "swamp angels" (mosquitoes). In his grandpa's day, Totch writes, outlaws and cutthroats would "shoot a man down just as quick as they'd knock down an egret, especially if he came between them and the plume birds."

His grandparents were both contemporaries of Ed J. Watson, the subject of Peter Matthiessen's best-selling Killing Mr. Watson, and Totch is featured in the recent award-winning PBS film Lost Man's River: An Everglades Adventure with Peter Matthiessen. He also appeared in Wind Across the Everglades, the 1957 Budd Schulberg movie in which Totch and Burl Ives sing some of Totch's Florida cracker songs.


Loren G. "Totch" Brown was born in Chokoloskee, Florida, in 1920. After purchasing his first motorboat at the age of thirteen (and retiring from formal schooling after the seventh grade) he worked as an alligator hunter, commercial fisherman, crabber, professional guide, poacher, marijuana runner, singer, and songwriter.

“The truest of true Florida voices.”
--The Daily Beast