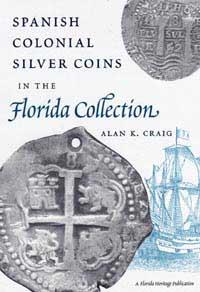 "After Spain's colonial American mints poured forth a flood of silver coins, some of that treasure ended up in wrecks off the Florida coast. Alan Craig's captivating study explains how those coins were made and what historians and numismatists can learn from them."--Kendall W. Brown, Brigham Young University

"The State of Florida is indeed fortunate that its colonial coin inventory, Florida's shipwreck patrimony, could be studied by Alan Craig. This work enriches us all."--Eugene Lyon, author of The Enterprise of Florida: Pedro Menéndez de Avilés and the Spanish Conquest of 1565-1568 and The Search for the Atocha


The State of Florida owns a vast collection, nearly 23,000 specimens, of Spanish treasure coins salvaged from shipwrecks in Florida waters. It is the largest of its kind in existence.
Alan Craig explains the circumstances behind their manufacture and describes the transporting of these unique hand-made coins, a complicated business full of intrigue and royal regulations. When freshly minted gold and silver left the Spanish colonial viceroyalties of Peru and Mexico aboard fleets of galleons headed to Spain, a number of ships sank off the coast of Florida. Counterfeiting was rife at the time, and Craig discusses a variety of mint scandals, especially those perpetrated by the notorious Francisco Gomez de la Rocha.
Craig also analyzes coins from the mints of Mexico City, Potosi, Lima, and elsewhere. He follows the procedure of making coins, from mining the silver to refining it and ultimately converting it into coins of various sizes, and takes readers on a vivid "virtual" visit to a mint where they watch African slaves pour molten silver from furnaces into special molds and witness the days of constant hammering, annealing, die striking, blanching, weighing, and counting and recounting necessary to produce a sack of coins.
Outstanding specimens from the Florida collection are depicted in numerous superb photographs, many enlarged to show elements of the engraving discussed in the text. In a final section Craig discusses the numismatic significance of the thousands of coins in the collection.
As both an economic history and a numismatic study, this work will be a fascinating resource for historians, archaeologists, coin collectors, and general readers interested in maritime treasure.
Alan K. Craig is professor emeritus of geography and geology at Florida Atlantic University in Boca Raton and coeditor of In Quest of Mineral Wealth.

"With 24 pages, Craig has you trapped, wondering what will become of the athletic Don Juan de Carajaval y Sande, sent from Spain in 1630 to inspect mismanagement of the mint in Potosi in what is now Bolivia. Craig and the University Press were generous with maps, illustrations of machinery from the 1750s and schematics showing how the coin production process worked, as well as of pictures of 292 of the coins themselves." -Florida Times-Union
--Florida Times-Union

"Beautiful book. The author takes us on a journey with these new coins, following them from the mines of Mexico and Peru through the complex process of smelting, plancheting and stamping to the ships at Portobello and Vera Cruz, to Havana and thence to Spain. There is a wealth of minute, scholastic information here for the collector and treasure hunter. For those who just enjoy learning more about the early days of exploration (and exploitation) of this part of the world, the author also provides fascinating background information on our history." -Tampa Tribune
--Tampa Tribune