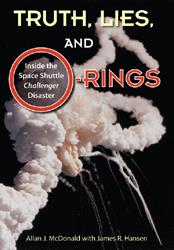 Truth, Lies, and O-Rings
Inside the Space Shuttle Challenger Disaster

What they didn't want you to know

"We all watched in shock and disbelief when Challenger was lost. Probably no one felt more disappointment and regret than Allan McDonald, who had warned us not to launch that day. His story tells of loss, grief, and the eventual rebuilding and recovery."--Robert "Hoot" Gibson, former Space Shuttle pilot and commander

"A major contribution to a difficult episode in the history of human spaceflight."--Roger D. Launius, Division of Space History, Smithsonian Institution

"McDonald tells the heartbreaking tale of how he saw his words of warning ignored, and the fateful consequences of that decision."--Donald C. Elder III, Eastern New Mexico University

On a cold January morning in 1986, NASA launched the Space Shuttle Challenger, despite warnings against doing so by many individuals, including Allan McDonald. The fiery destruction of Challenger on live television moments after launch remains an indelible image in the nation’s collective memory.

In Truth, Lies, and O-Rings, McDonald, a skilled engineer and executive, relives the tragedy from where he stood at Launch Control Center. As he fought to draw attention to the real reasons behind the disaster, he was the only one targeted for retribution by both NASA and his employer, Morton Thiokol, Inc., makers of the shuttle's solid rocket boosters. In this whistle-blowing yet rigorous and fair-minded book, McDonald, with the assistance of internationally distinguished aerospace historian James R. Hansen, addresses all of the factors that led to the accident, some of which were never included in NASA's Failure Team report submitted to the Presidential Commission.

Truth, Lies, and O-Rings is the first look at the Challenger tragedy and its aftermath from someone who was on the inside, recognized the potential disaster, and tried to prevent it. It also addresses the early warnings of very severe debris issues from the first two post-Challenger flights, which ultimately resulted in the loss of Columbia some fifteen years later.

Allan J. McDonald (1937?2021) retired as vice president and technical director for advanced technology programs at ATK
Thiokol Propulsion in 2001. He was the director of the Space Shuttle Solid
Rocket Motor Project at the time of the Challenger accident and, later, vice president of engineering for space operations during the
redesign and requalification of the solid rocket motors. James R. Hansen, professor of history and director of the Honors College at Auburn University, is the author of First Man: The Life of Neil Armstrong.

"Isn't just about what went wrong with the Challenger disaster but it is also about what went right as it also recounts what McDonald and others did to redesign the solid rocket motor and get the Space Shuttle flying again."
--Wire Eagle - Auburn University's news wire

"An even-handed take on an American aerospace tragedy."
--Book News

"A major contribution to the literature of the management of technology as well as to the history of the space program."
--Choice

"Whistle-blowing yet rigorous and fair-minded book….The first look at the Challenger tragedy and its aftermath from someone who was on the inside, recognised the potential disaster, and tried to prevent it."
--Spaceflight

"If you want to read a single book to prepare you for being unexpectedly thrust into the maw of ravenous media and politicians, I know of none better."
--Fourmilog

"Allan McDonald's insider account is likely to stand as the most comprehensive rendering of this tragic episode in the history of the US space program. McDonald argues convincingly that the Challenger accident need not have happened, had his warnings been heeded; therein lies the tragedy.

"McDonald, Hansen, and the publisher are to be commended for making this useful memoir available."
--Book Reviews - ISIS

"McDonald provides detailed technical explanations about how the O-rings failed, as well as how the solid rocket boosters were redesigned under his guidance. The testimony before the Presidential Commission still makes for a fascinating read that even the most casual NASA observer will find interesting."
--Alabama Writers' Forum

"Truth, Lies, and O-rings rewards readers with a fascinating account of technological disaster, as well as an eye-opening look at those who drive the space program. In the process it documents the ethical behavior of a compulsively honest engineer and his dogged determination to revive, rehabilitate, and stand by the space shuttle."
--Florida Historical Quarterly

"Capture(s) the essential issues of how rocket engineers, who are human beings and therefore sometimes frail and who sometimes make mistakes, nevertheless design, build, and launch remarkable pieces of machinery that we all ought to be proud of."
--Quest

"Aerospace and technology historians will find the book insightful for illuminating how and why the accident occurred, the interactions of government, industry, and academe, and the continued relevance of human agency within technocratic projects. Military historians and strategists will find themselves drawn to the attempt to create an "operational" system out of a complex assemblage lacking a clear mission. Scholars interested in bureaucratic behavior will find grist for their mills.Truth, Lies, and O-Rings is a critical history on a weighty topic with lessons generalizable to many similar endeavors."
--Technology and Culture, vol. 51

"The engineer's actions are certainly admirable and he is to be commended for writing his book in retirement, based on over fourteen hundred pages of detailed notes he made since the accident."
--ISIS 101: 2

"A "must-read" book for anyone who wants to become familiar with the Challenger accident and the subsequent recovery effort to return the space shuttle to flight."
--Rocket Reviews

Forever Young: A Life of Adventure in Air and Space