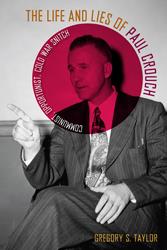 "Gives greater depth to our understanding of people in the Communist Party, and in particular of those who left and gave testimony against their former comrades."--Robert Korstad, author of Civil Rights Unionism

"Incisive, provocative, thoughtful, jargon-free, a good read. A balanced comprehensible account that weaves together Crouch’s life and his era’s complex, confused political history."--Daniel Leab, author of I Was a Communist for the FBI: The Life and Unhappy Times of Matt Cvetic


Paul Crouch (1903-1955) was a naïve, ill-educated recruit who found a family, a livelihood, and a larger romantic cause in the Communist Party. He spent more than fifteen years organizing American workers, meeting with Soviet leaders, and trying to infiltrate the U.S. military with Communist soldiers. As public perceptions of Communism shifted after WWII, Crouch’s economic failures, greed, and desire for fame morphed him into a vehement ideologue for the anti-Communist movement.

During five years as a paid government informer, he named Robert Oppenheimer, Charlie Chaplin, and many others as Communists, asserted that the Communist conspiracy had reached the very doorsteps of the White House, and claimed the civil rights movement was Communist inspired. In 1954, much of Crouch’s testimony was exposed as perjury, but he remained defiant to the end.

How, and why, one individual--once known as the most dangerous man in America--could become a loyal foot soldier on both sides of the Cold War ideological divide is the subject of this fascinating, incisive biography.

Gregory S. Taylor is associate professor of history at Chowan University in Murfreesboro, North Carolina, and author of The History of the North Carolina Communist Party.

A fine book. . .and a brutal reminder of the fragility of our civil rights and liberties.
--North Carolina Historical Review

Well written. . .Manage[s] to convey a great deal more about the complex motivations, whether honorable, unsavory, or self-serving, or many newly minted anticommunists during the Cold War.
--Journal of Southern History

A solid contribution to the literature on American communism and anticommunism and is certain to be the authoritative work on Crouch for years to come.
--Journal of American History

A solid contribution to the literature on American communism and anticommunism. . . [that] is certain to be the authoritative work on Crouch for years to come.—
--Journal of American History