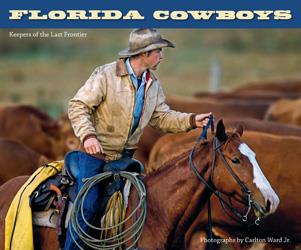 Visit a Florida where sunburn is the result of honest, hard work

"Without its lush ranchlands, there would be precious little left to see of old Florida, and nowhere for some of our most endangered wildlife to survive. Carlton Ward's colorful tribute to this dwindling frontier is also a call to save what remains of it. The alternative is unthinkable."--Carl Hiaasen

"Ward's masterful photographs go beyond pictures of cowboys and the Florida landscape to taste the life, feel the land, and appreciate the importance of the past, present, and future of ranching in the unique environment of Florida."--Todd Bertolaet

"Opens a window to a world that many Floridians are unaware of, and teaches us why we should all care about this disappearing way of life."--Jason Hahn

Drive a few miles beyond Disney World, past the gaudy souvenir shops, all-you-can-eat buffets, and chain hotels, and you’ll find the largest producing cattle ranch in the world. Indeed, nearly one-fifth of the state is devoted to the cattle industry, and these working ranches play a vital role in Florida's economic health.

Yet even as encroaching urban sprawl threatens their way of life, photographer Carlton Ward has been documenting the often unseen world of Florida cowboys. Every day before dawn, they saddle their horses, coil their lariats and whips, and ride out to work the herds. Over 15,000 ranches raise nearly two million head of cattle--the living legacies of the longest history of ranching in North America.

Florida cowboys share their land with bears, panthers, and other endangered species, along with irreplaceable wetlands that help sustain the state's strained water resources. Complemented by twenty historical, cultural, and environmental essays from Dana Ste Claire, Joe Akerman, Audubon of Florida, and the Seminole Tribe, among others, Ward's stunning photographs capture the grit and raw beauty of inland Florida, its enduring cowboys, and the land they protect.

Carlton Ward Jr. is an eighth-generation Floridian from a pioneering ranching family.

"Stunning photographs that capture the grit and raw beauty of inland Florida and its enduring cowboys, and the land they protect."
--Winter Haven News Chief