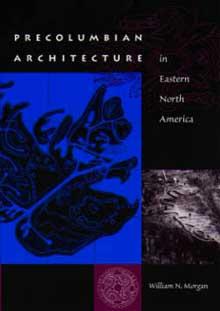 William Morgan, one of the nation's renowned architects, analyzes prehistoric architecture beginning more than 6,000 years ago and continuing through two periods of stunning creativity before Columbus’s arrival in the New World. Magnificently illustrated with scaled drawings and aerial and eye-level photographs, it is the most comprehensive overview to date of ancient eastern North American monuments.
Morgan organizes the book in three periods: the beginnings of architecture dating from 4000 B.C., at such sites as Watson Brake and Poverty Point in Louisiana; the first extraordinary era of architectural achievement near the beginning of the Christian era, at the ceremonial centers of the Ohio Valley; and the period just preceding Columbus's arrival, at the remarkable temple towns of the Mississippi Valley.
In a clearly and concisely written account, Morgan describes architectural characteristics of 96 precolumbian sites and offers razor-sharp graphics and supplementary information about each. In addition, 12 well-known sites--such as Stonehenge, the Acropolis, and Angkor Wat--are presented at the book's graphic scale to assist readers in comprehending the size and character of the ancient North American monuments. Not only architects but archaeologists, anthropologists, geographers, artists, and anyone interested in the remote past will discover in this book prehistoric earthworks that are dramatically rich in both form and meaning.

William N. Morgan, FAIA, a practicing architect in Jacksonville, Florida, is the author of Ancient Architecture of the Southwest and Prehistoric Architecture in Micronesia. A frequent visiting lecturer in architecture at universities throughout the United States, he recently was appointed the Beinecke-Reeves Distinguished Chair in Architectural Preservation at the University of Florida. During his career he has received numerous honors and design awards, including the AIA’s 1998 Institute Honor for research and recording of ancient American civilizations.

"Morgan's book on Native American earth architecture belongs on the bookshelf of every reader interested in the archaeology of the eastern United States, if for no other reason than its outstanding site plans."-- American Antiquity
--American Antiquity

Earth Architecture: From Ancient to Modern