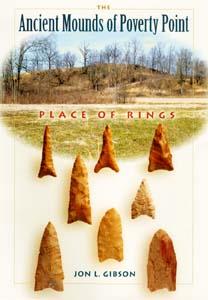 The Ancient Mounds of Poverty Point
Place of Rings

"Gibson, the grand old man of Poverty Point archaeology, has presented his personal reflections on his and others' extensive work at this mysterious and awe-inspiring site. He recounts (in his equally mysterious Louisiana voice) the setting, meaning, and history of archaeological thought that surround the site."--Mike Russo, National Park Service

Jon Gibson confronts the intriguing mystery of Poverty Point, the ruins of a large prehistoric Indian settlement that was home to one of the most fascinating ancient cultures in eastern North America.

The 3,500-year-old site in northeastern Louisiana is known for its large, elaborate earthworks—a series of concentric, crescent-shaped dirt rings and bird-shaped mounds. With its imposing 25-mile core, it is one of the largest archaic constructions on American soil. It's also one of the most puzzling—perplexing questions haunt Poverty Point, and archaeologists still speculate about life and culture at the site, its age, how it was created, and if it was at the forefront of an emerging complex society.

Gibson's engaging, well-illustrated account of Poverty Point brings to life one of the oldest earthworks of its size in the Western Hemisphere, the hub of a massive exchange network among native American peoples reaching a third of the way across the present-day United States.

Gibson, the eminent authority on the site, boldly launches the first full-scale political, economic, and organizational analysis of Poverty Point and nearby affiliated sites. Writing in an informal style, he examines the period's architecture, construction, tools and appliances, economy, exchange, and ceremonies.

Jon L. Gibson is professor of anthropology and director of the Center for Archaeological Studies at the University of Louisiana, Lafayette. He is the author of Ancient Earthworks of the Ouachita Valley in Louisiana and the editor of Exchange in the Lower Mississippi Valley and Contiguous Areas at 1100 B.C.

"a type of book more archaeologists should endeavor to write. He uses as easy narrative style to weave the hard data and his intriguing interpretations into a volume that both the general reader and the professional archaeologist can enjoy. It is a comprehensive study of the complex economic, political, social, and religious systems that created this unique site." - Archaeology
--Archaeology

"Liberally illustrated with maps and photographs, The Ancient Mounds of Poverty Point was written primarily for the general public, but has plenty of science for the interested professional." - About. The Human Internet
--About.The Human Internet

"Gibson vividly demonstrates the site's importance over the last 3,500 years to the original inhabitants, contemporary local folks, and dozens of archaeologist who have come to know the Place of Rings. By weaving anecdotes, memoirs, and colorful sayings into and around a rich interpretation of the solid archaeological data collected over years of work at Poverty Point and in the surrounding region, Gibson has produced a highly entertaining piece that should please a wide audience. Highly enjoyable and impressive compilation of research at the site of Poverty Point to date. Gibson's presentation is comfortable and inviting and should please any reader with interests in the archaeology of one of the most important and enigmatic prehistoric sites in the eastern United States" - Journal of Alabama Archaeology
--Journal of Alabama Archaeology

"[This book] will have wide appeal to readers interested in Native American culture in general. Gibson tells a fascinating story, rich in information and speculation, easily understood and appreciated by the lay reader." - Todd Harris