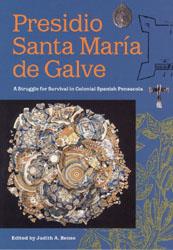 Edited by Judith A. Bense

"An excellent book that will stand as the definitive historical and archaeological reference on early Pensacola . . . and will undoubtedly become a classic."--Gregory Waselkov, University of South Alabama

This examination of the Pensacola presidio and its fort during the first Spanish colonial period provides a rich inventory of artifacts and new interpretations of life among the 18th-century settlers and their evolving interactions with local native populations and with Mobile and Veracruz. Based on long-term interdisciplinary study and excavation, Judith Bense’s book provides the first intensive account of an early colonial Spanish presidio in La Florida. As such, it will be of interest to researchers throughout the Spanish borderlands from California and northern Mexico to Florida.

1. Introduction and Overview, by Judith A. Bense

4. Archaeological Remains, by Judith A. Bense and H. James Wilson

9. Summary and Discussion, by Judith A. Bense

Judith A. Bense is professor and chair of anthropology and director of the Archaeology Institute at the University of West Florida. She is the editor of Archaeology of Colonial Pensacola, 1750-1821 (UPF, 1999) and Archaeology of the Southeastern United States: Paleoindian to World War II (1986).

" a good illustration of how archaeology can validate documents-based history."
--Choice

"presents a rich inventory of artifacts, archaeological remains, and historical photos documenting how the presidio on Pensacola Bay marked the beginning of more than a century of Spanish occupation in West Florida."
--Florida History & The Arts

"The inter-weaving of the historical and archaeological data shows how both disciplines are necessary to fully understand the site." "Most historical studies claim to integrate the two approaches. This book delivers on that promise."
--Journal of Field Archaeology

"Because the early history of Florida is not 'American', it has not received the attention it deserves." "This volume reports one piece of the larger tapestry of Spanish colonial efforts in Florida. An admirable group of historians and archaeologists has produced an excellent example of how rich and interesting the result can be."
--Florida Historical Quarterly

"For those interested in a comparative analysis of frontier experience, this book provides a wealth of information in the analyses, extensive graphs, lists, and descriptions of artifacts, drawings, photographs, and selected documents."
--Gulf South Historical Review