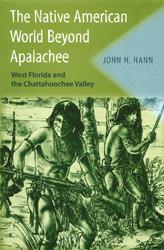 The Native American World Beyond Apalachee:
West Florida and the Chattahoochee Valley

"John H. Hann is the foremost authority on the history of the Native American peoples of Florida in the Spanish colonial period. This volume joins his earlier books on the Apalachee, Calusa, and Timucua as definitive studies of Native Americans in the colony of La Florida, and provides a much needed examination of peoples and societies in Northwest Florida, southern Alabama and Georgia in the 16th and 17th centuries."--John F. Scarry, University of North Carolina

"An outstanding source of new documentation on the emergence of the Creeks, as well as the smaller tribes of Spanish Florida’s hinterlands."--Vernon James Knight, University of Alabama

This is the first book-length study to use Spanish language sources in documenting the original Indian inhabitants of West Florida who, from the late 16th century to the 1740s, lived to the west and the north of the Apalachee. Previous authors who studied the forebears of Creeks and Seminoles from the Chattahoochee Valley have relied exclusively on English sources dating from the second half of the 18th century, with the exception of John R. Swanton, who had limited access to Spanish records for his classic works from 1922 to 1946. In this history of the region's Native Americans, Hann focuses on the small tribes of West Florida--Amacano, Chine, Chacato, Chisca and Pansacola--and their first contacts with Spanish explorers, colonists, and missionaries. He also gives significant perspective to the forebears of the Lower Creeks, with an emphasis on the late 17th century, when Spanish documents recorded the important events of the interior regions of the Southeast.

As Hann's fifth study of Florida natives, this book includes chapters on the Yamasee War and its aftermath and the early 18th-century dissolution of many societies and withdrawal of Spaniards from the region. This volume will be of great interest to archaeologists working in the Lower Southeast, historians and ethnohistorians specializing in Native American or Spanish colonial history, Latin American and Caribbean scholars concerned with Spanish colonial contexts, and anyone interested in Native Americans or Florida history.

John H. Hann is site historian for the San Luis Archaeological and Historic Site in Tallahassee.

"John Hann is one of the most accomplished ethnohistorians working in the US Southeast. His mastery of the ethnography, archaeology, linguistics, and historical documentation of the tribes of the lower Southeast in the Spanish colonial era is truly impressive." "Helps to raise the curtain of obscurity on the colonial hinterland by careful attention to Spanish colonial documents and other lines of evidence."
--Journal of the Royal Anthropological Institute