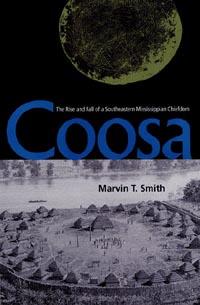 Coosa
The Rise and Fall of a Southeastern Mississippian Chiefdom

"A convincing account of where these people came from, and what happened to them in the shadowy years after their fateful encounter with De Soto’s Spanish army."--Vernon J. Knight, University of Alabama

Writing about a powerful Native American society at the dawn of European contact, Marvin Smith, in a colorfully illustrated book, traces the rise and collapse of the chiefdom of Coosa, located in the Ridge and Valley province of northwestern Georgia and adjacent states.

From humble beginnings, Coosa became one of the most important chiefdoms in the Southeast, dominating a territory from present eastern Tennessee to central Alabama. Following contact with three Spanish expeditions in the 16th century, Coosa began its rapid descent. Disease, population movements, political collapse, and changes in subsistence and technology enveloped the population in the ensuing years. By the beginning of the 18th century, the once powerful chiefdom had been reduced to a few towns in the Creek Confederacy.

Explaining for the first time this remarkable demise, Smith blends historical and archaeological evidence to tell the complex story. Written for a general interest audience, it also will be a valuable reference work for the study of the material culture of the contact period.

Marvin T. Smith is professor of anthropology at Valdosta State University in Georgia. He is the author of more than 70 scholarly publications, including The Archaeology of Aboriginal Culture Change in the Interior Southeast: Depopulation during the Early Historic Period (UPF, 1992). In 1992 he received the C. B. Moore Award for Excellence presented by the Lower Mississippi Survey at the annual meeting of the Southeastern Archaeological Conference.

"Marvin Smith… contributes a significant work to a vibrant field… provides a good overview of Coosa society and will be a valuable addition to courses primarily concerned with Native Americans and the Southeast." - H-Net
--H-Florida

"An exciting new book. A succinct, largely jargon- free account that introduces readers to early Creek history, archaeological methods, and the material and social world of the ancient Coosa people. This book will therefore appeal to undergraduates, lay readers, and Georgia history buffs of all kinds. Popular in its appeal, Smith's book also makes a significant contribution to the specialized fields of southeastern Indian archaeology and history. His meticulous archaeological reconstruction of Coosa's 'lost years' (1568- 1670) for which the documentary record is largely silent, remains an admirable achievement." - Georgia Historical Quarterly
--Georgia Historical Quarterly

"Provides a clear and concise historical account of the Coosa people. The importance of this book lies in its ability to merge archaeological, ethnographic, and historical evidence to construct a narrative that connects the unrecorded events of Pre-Columbian history in the Southeast with the more familiar story of native activities during the Colonial era. Provides a blueprint for other scholars to fill in the gaps of southeastern indigenous history during the sixteenth and seventeenth centuries and it gives the general public a readable and entertaining account of one group of Southeastern Native Americans." - University of Kansas, Indigenous Nations Studies
--Indigenous Nations Studies (University of Kansas)