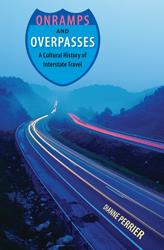 Onramps and Overpasses
A Cultural History of Interstate Travel

History at the next exit--whatever interstate you're driving on

"For all those who think there's nothing to see along the interstates, Perrier offers fascinating people and places, some lost to history, others just off the next exit."--Brian Butko, editor, Western Pennsylvania History

"The American landscape is lost to its citizens traveling a mile-a-minute in sound-proof and hermetically sealed landyachts. Dianne Perrier rescues an important view of the terrain we no longer see, feel, or respect."--Dan McNichol, author of The Roads That Built America: The Incredible Story of the U.S. Interstate System

Designed as a defense and commercial network to link Washington, D.C., with state capitals, the interstate highway system carries more traffic than anyone could have imagined fifty years ago. Lost today in the rush to get from point A to point B--with restaurants, hotels, and gas stations along the way more or less interchangeable from exit to exit--is the fact that these roads were laid down along ancient routes.

The red trace of tail lights we see in heavy nighttime traffic mirrors the ancient footpaths and traces used by Native Americans and early settlers. Route numbers have replaced colorful descriptors, such that the Oregon Trail is now I-80, and travelers tracing portions of the Santa Fe Trail do so along I-25.

In Onramps and Overpasses Dianne Perrier seeks to remind us of what we have lost and that this history is often as close as the next exit. She tells stories of Davey Crockett, Horace Greely, and Charles Dickens, of women in hoop skirts, the search for eighteenth-century fast food, and nineteenth-century "truckers."

Reminding us that the journey is just as important as the destination, Perrier restores the beauty and history of the American landscape we all too often ignore at 65 miles per hour.

Dianne Perrier is a freelance writer and editor who splits her time between Ontario, Canada, and Fernandina Beach, Florida.

"Demonstrates the great power that ease of transportation has had on the economy for th movement of goods and on Americans who got in their cars and began to travel for new employment opportunities and for recreation on a scale never seen before."
--BookViews (Alan Caruba)

"This is the kind of book one wants thrown in the backseat during every road trip, or at least by the armchair when nostalgic wanderlust strikes in the evenings."
--Sacramento Book Review

Interstate 81: The Great Warriors Trace
Interstate 95: The Road to Sun and Sand