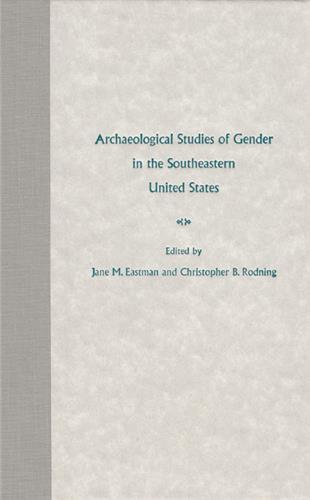 Edited by Jane M. Eastman and Christopher B. Rodning

"This book begins the attempt to answer many of the archaeological questions we are finally asking about the long-ignored but crucially important and ever-present social roles of gender among native Americans in the Southeast." -- Nancy Marie White, University of South Florida, coeditor of Grit-Tempered: Early Women Archaeologists in the Southeastern United States

In the first book about the archaeology of gender in native societies of southeastern North America, these lively essays reconstruct the different social roles and relationships adopted by women and men before and after the arrival of Europeans in the 16th century. Case studies explore the ways in which gender differences affected people’s daily lives by examining material evidence from archaeological sites, including grave goods, human remains, spatial configurations of burials and architecture, and evidence for economic specialization and the division of labor within households.

Contents
Introduction: Gender and the Archaeology of the Southeast, by Christopher B. Rodning and Jane M. Eastman
1. Challenges for Regendering Southeastern Prehistory, by Cheryl Claassen
2. The Gender Division of Labor in Mississippian Households: Its Role in Shaping Production for Exchange, by Larissa Thomas
3. Life Courses and Gender among Late Prehistoric Siouan Communities, by Jane M. Eastman
4. Mortuary Ritual and Gender Ideology in Protohistoric Southwestern North Carolina, by Christopher B. Rodning
5. Those Men in the Mounds: Gender, Politics, and Mortuary Practices in Late Prehistoric Eastern Tennessee, by Lynne P. Sullivan
6. Piedmont Siouans and Mortuary Archaeology on the Eno River, North Carolina, by Elizabeth I. Monahan Driscoll, R. P. Stephen Davis, Jr., and H. Trawick Ward
7. Auditory Exostoses: A Clue to Gender in Prehistoric and Historic Farming Communities of North Carolina and Virginia, by Patricia M. Lambert
8. Concluding Thoughts, by Janet E. Levy

Jane M. Eastman is visiting assistant professor of anthropology at East Carolina University. Christopher B. Rodning is a doctoral candidate in the Department of Anthropology at the University of North Carolina, Chapel Hill.

Fort San Juan and the Limits of Empire: Colonialism and Household Practice at the Berry Site
Archaeological Studies of Gender in the Southeastern United States