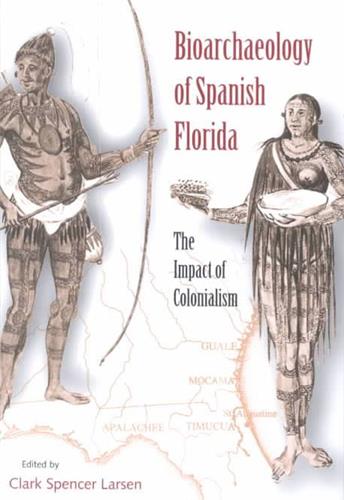 Bioarchaeology of Spanish Florida
The Impact of Colonialism

"An original and an extremely important contribution to the continuing scholarship that chronicles the impact of European colonization and missionization on the health, population history, and lifestyle of Native Americans of the southeastern United States. . . . Makes equally important contributions to the theory and methodology of bioarchaeological research."--Michael Pietrusewsky, University of Hawaii

These important essays address the biological consequences of the arrival of Europeans in the New World and on the lifeways of native populations following contact in the late 16th century. Moving away from monocausal explanations of population change, they maintain that disease should be viewed as only a facet of a complex problem and that issues relating to diet, nutrition, activity, the work environment, and social and political change are equally important.
The result of a 20-year project directed by the editor, this work involved a team of scientists who explicitly addressed their research to the study of an extensive series of human remains. No comparable body of information currently exists for any other area of the New World.


Clark Spencer Larsen is Distinguished Professor of Behavioral and Social Sciences and Chair of the Department of Anthropology at Ohio State University. In addition, he is a research associate at the American Museum of Natural History, New York. He is the author of Skeletons in Our Closet: Revealing Our Past through Bioarchaeology and Bioarchaeology: Interpreting Behavior from the Human Skeleton and he currently serves as the editor-in-chief of the American Journal of Physical Anthropology.