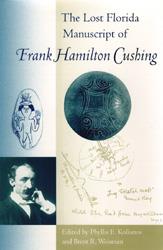 "The late 19th century was a time of great intellectual flowering, and Frank Hamilton Cushing bloomed along with his contemporaries. His genius and scholarship are apparent once again with the publication of this lost manuscript. How fortunate for Florida that Cushing arrived on the Gulf Coast in the 1890s and recorded everything that 'his eyes beheld.' His vivid descriptions of the environment and its inhabitants furnish a mental picture of a time and place that have long since vanished."--Barbara A. Purdy, professor emerita, University of Florida, and curator emerita, Florida Museum of Natural History

"Frank Cushing's long-lost archaeological manuscript adds important details on the Hope and Safford mounds as well as a host of other coastal sites in southwest Florida. It also firmly established Cushing as an important and innovative anthropological archaeologist whose methods and techniques were well ahead of his time."--William H. Marquardt, curator in archaeology, Florida Museum of Natural History


Frank Hamilton Cushing's "forgotten" manuscript, considered by some to be the legendary anthropologist's masterwork, conveys the untamed and undeveloped nature of south Florida in the 1890s and offers new insights into Cushing's significant contributions to Florida archaeology. It describes his initial reconnaissance in 1895 to southwest Florida and his comparative evaluations of artifacts excavated in Tarpon Springs area the following year.

The original manuscript--some 708 typed half-pages--was housed in the Smithsonian's National Anthropological Archives in Washington, D.C., and only recently recognized as the "lost" Florida volume that Cushing was preparing at the time of his death in 1900. At that time, the editors observe, "Florida was an archaeological terra incognita." Considered a genius even by his detractors, Cushing had no predecessor on the Gulf Coast, particularly in the southern area from Charlotte Harbor to Key Marco, and Florida occupied a marginal position both geographically and intellectually, quite distant from the center of archaeological thought. The limited amount of time Cushing spent in Florida and the limited range of his actual travels make the scale and insight of his observations all the more remarkable.

In reading Cushing, the editors write, they were struck by the immediacy of his comprehension of the inextricable relationships between ancient cultures and the environments in which they lived. The manuscript presents keen observations of the region's vegetation and terrain, including clear descriptions of its sinkhole system, underground aquifer, and archaeological sites that existed prior to extensive development.

The work culminates in Cushing's impressive attempt to connect the prehistoric civilizations of Florida, the American Southwest, Mexico, the Yucatan, and the Mississippi valley into one massive "continental arc" of culture. It presents all of Cushing's original narrative, glossed with contextual material, and it includes his original figures when available. This grand intellectual synthesis of Cushing's Florida fieldwork reflects his role in shaping American anthropology and in the interaction among the early structure of scientific inquiry, the geological vastness of the American continent, and the cultural diversity of its native peoples.

"A must read for those interested in Florida history, archaeology and cultural anthropology."
--Tampa Tribune

Unconquered People: Florida's Seminole and Miccosukee Indians
The Florida Journals of Frank Hamilton Cushing
We Come for Good: Archaeology and Tribal Historic Preservation at the Seminole Tribe of Florida