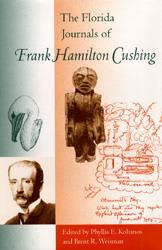 "In addition to a wealth of archaeological evidence, Frank Hamilton Cushing left a treasure trove of fascinating images of Florida's Gulf Coast as it appeared to him in the late 19th century. I wish I could visit these places and see what his eyes saw more than 100 years ago."--Barbara A. Purdy, professor emerita, University of Florida, and curator emerita, Florida Museum of Natural History

"Brings to light the long-missing Florida journals of one of the most brilliant yet tragic figures of anthropology. Through Frank Cushing's poignant writings, the reader will learn about one of the most important archaeological excavations ever undertaken and glimpse a still-wild south Florida on the threshold of developments that would change it forever."--William H. Marquardt, curator in archaeology, Florida Museum of Natural History

These previously unpublished journals by one of the most complex and enigmatic American anthropologists, Frank Hamilton Cushing (1854-1900), offer a dramatically new perspective on his Florida explorations. Recorded during 1895-96 as he traveled the Gulf Coast, these daily personal observations add credibility to his contributions to science and anthropology and demonstrate his independent and intuitive intellect.

Sponsored by the Smithsonian Institution's Bureau of American Ethnology, Cushing's expedition came to Florida to explore the extraordinary remains of the ancient mound-building cultures along the coast from Tarpon Springs south to Marco Island. Cushing's discovery of the muck pond that came to be known as the fabled Court of the Pile Dwellers, located in what is now Collier County, uncovered a rich archaeological site with some of the finest examples of prehistoric native art in North America. After excavation of the site, Florida archaeology vaulted into national prominence, adding a critical chapter to Cushing's productive yet controversial career.

Known to his colleagues for his earlier research among the Zuni Indians, Cushing often drew criticism from scholars for his search for a theory that could demonstrate a psychic unity linking all cultures that shared common origins, however remote. His Florida journal entries show how he tried to prove himself to his professional contemporaries. They also show his love of adventure and passion for nature. While he suffered frequent headaches and other physical ailments when he worked indoors, Cushing was full of energy and vitality in the field. His notes express elation at the sight of the canals, lagoons, muck fields, and shell works that he saw again and again throughout his journey, and his descriptions will fascinate anyone interested in Florida's landscape at the beginning of the 20th century.

Cushing's monumental findings at the Key Marco site have been vitally important to a global understanding of the technological, social, and cosmological complexity of indigenous maritime societies. This collection of personal journals opens the door to new research and information for archaeologists and archaeological theory. Written by a visionary on the eve of Florida's entry into the modern world, the journals provide a rare glimpse of the nascent field of cultural anthropology.


Phyllis E. Kolianos is environmental education manager for the Weedon Island Preserve Cultural and Natural History Center. Brent R. Weisman is associate professor of anthropology at the University of South Florida in Tampa.

"These volumes address a wide audience. The impact of these works goes way beyond the obvious importance to archaeologists working in South Florida. They are essential reading for anyone interested in the early pioneer history of south Florida and its predevelopment environment and ecology. But the real value of the work transcends regional concerns, and I can confidently state that thse are the most important works dealing with the history of American archaeology in the past 10 years. Anyone who thinks they know the history of American archaeology must read these works because, until they do, they simply do not have a complete and realistic understanding of the discipline at the turn of the twentieth century. This shortcoming is an appalling omission in the record of our discipline, one now rectified with the publication of these great works. These books are simply amazing and will reveal Cushing in a new light as the true father of American archaeology, as well as provide an understanding of one of the most important archaeological regions in North America, southwest Florida."
--Journal of Anthropological Research

Unconquered People: Florida's Seminole and Miccosukee Indians
The Lost Florida Manuscript of Frank Hamilton Cushing
We Come for Good: Archaeology and Tribal Historic Preservation at the Seminole Tribe of Florida